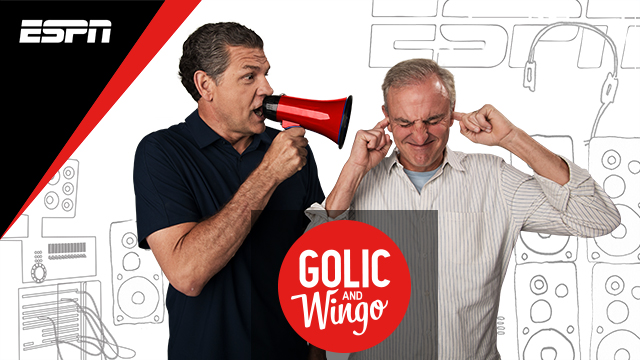 ESPN Radio WNTX’s morning drive show is hosted by Mike Golic and Trey Wingo. This teams up sports broadcasting legend Golic together with longtime NFL host Wingo, broadcasts weekdays from 6 – 9a.m. on ESPN Radio WNTX 1350AM/96.5FM. Mike Golic Jr., who hosts his own national ESPN Radio show and has been a frequent contributor on other ESPN Radio programs, will join the show for one hour daily

Mike Golic is the co-host of ESPN Radio’s new weekday morning drive show, Golic and Wingo, alongside Trey Wingo and Mike Golic Jr. Golic formerly co-hosted the long-running Mike & Mike, on which he partnered with Mike Greenberg for nearly 18 years.

Golic joined ESPN in 1995 as an NFL studio analyst on NFL 2Night and later joined NFL Live – where he and Wingo worked together in 2003 when it debuted.  He was also a color commentator for the Arena Football League (1996-98, 2007-08) and ESPN/ABC college football games until the mid-nineties. He is a nine-year NFL veteran, who played defensive tackle for the Houston Oilers, Philadelphia Eagles and Miami Dolphins. He is also a member of the National Association of Broadcasters Broadcasting Hall of Fame, as part of the 2016 class with his Mike & Mike co-host, Greenberg.

Born December 12, 1962, Golic is a 1985 graduate of the University of Notre Dame where he served as captain of the football team during his senior season and wrestled. Golic is married with three children.

Wingo has hosted NFL Live since its inception in 2003. He has anchored ESPN’s long-running highlight show NFL PrimeTime since 2007, and he hosted NFL Insiders: Sunday Edition for two seasons (2015-16). A prominent figure in ESPN’s many tent-pole NFL events throughout the year, Wingo has anchored SportsCenter specials during Super Bowl and NFL Draft coverage. He has also hosted ESPN’s NFL Draft telecast and annual Pro Football Hall of Fame enshrinement ceremonies (since 2004), and he conducts the SportsCenter post-game interview with the Super Bowl MVP.

Wingo joined ESPN as an anchor for ESPNEWS from KSDK-TV in St. Louis, Mo., where he was a sports anchor/reporter for six years (1991-97).  Prior to that, he was a sports anchor/reporter for WFMZ-TV in Allentown, Pa., for a year and the sports director at WMGC-TV in Binghamton, N.Y. (1988-90).  He also served for a year in a similar position at Binghamton’s WICZ-TV.  Wingo began his career in 1987 as a sports producer for NBC’s News at Sunrise in New York.

A native of Greenwich, Conn., Wingo was graduated from Baylor University in 1985 with a bachelor’s degree in communications.  He won six Mid-America regional Emmy awards for reporting, including three straight years for outstanding sports reporting.  He remains active in a variety of causes, including the Prostate Cancer Foundation’s Athletes for a Cure campaign, The V Foundation for Cancer Research and Special Olympics.

Mike Golic Jr. is a contributing host on ESPN Radio’s Golic and Wingo, alongside the show’s co-hosts – his father Mike Golic and Trey Wingo. Golic and Wingo, which premiered on ESPN Radio and ESPN2 on November 27, 2017, airs weekdays from 6 – 10 a.m. ET and features Golic Jr. for one hour each day. A former college football Academic All-American, Golic Jr. brings his football background and pop culture knowledge to the show along with his father’s classic sports commentary and humor and Wingo’s wit and deep sports expertise.

Golic Jr. is also the host of ESPN Radio’s First and Last (weekdays, 4 a.m. ET). He joined ESPN in November 2015, teaming with his father, Mike & Mike co-host Mike Golic, on a college football and NFL-focused podcast, Mike & Mike Jr. Since then, Golic Jr. has served as a guest host on Mike & Mike, a college football analyst during ESPN Radio’s broadcast of the the 2015 Hawai’i Bowl and was a host of the weekend program  Rothenberg Mike’d Up on ESPN Radio, with Dave Rothenberg and Michael Wallace. Golic Jr. also teamed with ESPN Radio’s Jon “Stugotz” Weiner on the Sunday morning show Weekend Observations with Stu & Jr.

Golic Jr. graduated from the University of Notre Dame in 2012 with a bachelor’s degree in Film, Television and Theater. While at Notre Dame, Golic Jr. was an offensive lineman, and in 2013, he entered the NFL as an undrafted free agent with the Pittsburgh Steelers. He lives in West Hartford, Conn.